Volkswagen owners seem to have a unusual fondness for the VW shift pattern.  I am not sure why as it is not a particularly intricate design, just a simple image that shows drivers where to move the stick shift when selecting gears: 1-4, reverse, and neutral.  Martha’s hypothesis is that, for American drivers at least, Volkswagen put reverse in the wrong place when compared to our domestic vehicles. Whatever the reason might be, the pattern sprouted its own persona, despite its unassuming nature, and can be found on T-shirts, hats, bumper stickers, and, yes, even as a tattoo.

On the bay window bus, the shift pattern adorns the front ashtray located just above the stick shift in the center-bottom of the dashboard.  On 68-71(72/3?) bays, the ashtray has a black metal face on which this pattern is painted in white.  On later models, a black plastic face replaces the metal one, but it still retains the white shift pattern (although ‘N’ for neutral was eventually dropped from the pattern).  Moby came with a late, plastic-faced ashtray and, despite its great condition, this bugged me a bit because, well, it was not appropriate for a ’71.  As luck would have it, I happened to have Big Red One’s (also a ’71 bus) dashboard sitting out in the parts stash and, so all could be right in the world, I retrieved it a little over a year ago.  Alas, while the ashtray was indeed the correct variant, the shift pattern was just about completely worn away.  Given the options, I decided to keep the later, incorrect ashtray so as to have the company of that all endearing set of white lines and numbers.  In the mean time, I kept an eye out for a good condition early ashtray.

Turns out, good condition ashtrays with complete shift patterns are a little tough to find as many have become rusty or, like mine, the white paint has worn away.  As an alternative option, there are reproduction stickers of the shift pattern out there; just peel, stick, and walla – the ashtray has a new image.  The drawback to these stickers is that they are just that, stickers – large, square, black (or clear) stickers with a white shift pattern in the middle.  When attached to the ashtray, the black/clear portion of the sticker becomes obvious and, to me, just did not look right.

At the beginning of last spring, my family and I attended the smallest of small festivals in the smallest of small towns not too far from our home.  It was a nice celebration of this particular town’s founding, history, and community pride.  Setup along one side of the town square were tables and awnings where various vendors hocked a sundry of wares; one of which sold glassware.  All the glasses, mugs, cups, wine goblets, and such sold at this table were decorated with random, colorful patterns of vinyl decals or vinyl logos of popular companies and sports teams.  As we perused through the transparent merchandise looking for a circle with a ‘V’ resting on a ‘W’, Martha mentioned that our friend Tim and his wife owned a vinyl cutter capable of creating the vinyl decals now in front of us (Tim printed our cabinet door check strap; check out his blog here).  I am not sure how my brain went from a VW emblem on a mug to my ashtray dilemma, but Martha’s revelation got me thinking about trying to make a vinyl reproduction shift pattern.

After getting distracted for a few months, I settled on two options last November: cut a complete pattern from white vinyl and stick it to the early bay ashtray, or cut a stencil out of vinyl (color optional) and paint the pattern as per the original.  I finally asked Tim about the feasibility of cutting such thin, small numbers and lines in December and he did not seem at all worried; I only needed a digital image for the cutter.  At first I thought about trying to create the digital image from scratch, but I am just not that good with graphical software.  I then considered scanning the ashtray or taking a picture of the pattern, but guessed that this too would be difficult.  I then remembered that there is a thing called the internet. Within a minute or two I found this open clipart image (open means free!). After downloading, I reshaped the ‘R’ and ‘N’ a bit so they better matched the originals, and resized the whole figure in the same dimensions as the original pattern (2.8 cm high x 4 cm wide).  Tim used the image to cut two shift pattern decals and two stencils.  We will see how well the decals stay stuck over time, but, over a month later, so far so good.  If they fail during the hotter, more humid summer months, I will try the stenciling/painting option and report back.

One note: I am not sure this will work well on the textured plastic of late bay ashtrays as the decals may have trouble sticking and paint could easily work its way under a stencil.  If anyone tries this on a late model ashtray, I would be very interested to know how it worked out.

Moby’s late model ashtray with plastic face. The shift pattern remains in good shape. At some point, VW dropped the neutral ‘N’ from the pattern. 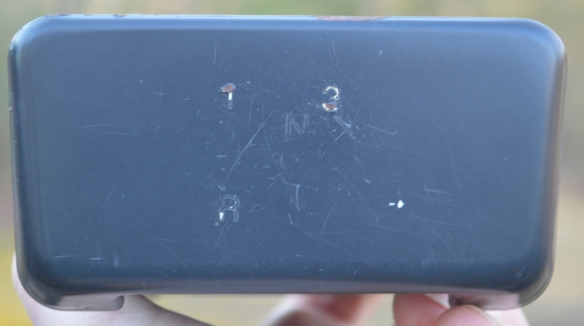 Big Red One’s metal-faced early bay ashtray. The remains of the sift pattern are visible and were useful for locating the new lines and numbers.

This is what the black reproduction decals look like on an early bay ashtray. Photo courtesy of The Samba photo gallery.

Once I downloaded the clipart image, I adjusted the ‘R’ and ‘N’ so they looked more like the originals. The result above isn’t perfect, but will do OK. I also resized the image so the measurement from the top of the number 1 to the bottom of the ‘R’ is 2.8 cm.  The distance from the point where the left horizontal line turns down toward the ‘R’ over to the right side of the number 4 is 4 cm. These measurements are pretty close to the original pattern as measured from the late ashtray. (This image should be useable after downloading.)

Decals on the left and stencil patterns on the right. Evidently getting the little pieces from the holes in the 4 and ‘R’ to remain in place on the stencil was a bit of a challenge. Makes me wonder how easy it will be to place them on the ashtray prior to painting.

The stickers are so small and delicate, I found it easier to lightly stick them to the tip of an Exact-O knife first. Once moved into position with the knife, I used the edge of a fingernail to stick part of the line or number to the metal surface. I could still used the knife for a final nudge or two in order to straighten a section or adjust a number. When happy with the position, I firmly pressed the decal against the face. I started with the shift path lines first (above).

With the path lines in place, I could easily position the numbers and letters.

All done.  Thanks for your help Tim!

Compared to the original, later model on left.